Although for the most part self-taught, Houston Artist John Ross Palmer first studied art professionally at the Santa Reparata International School of Art in Florence, Italy in 2001. In 2003, he studied under Robert Venosa in Cadaques, Spain (the former home of Salvador Dali). John spent the summer of 2004 working with Master Painter Philip Rubinov-Jacobson in the Austrian Alps. In 2005, Palmer studied mono-printmaking on Skopelos Island, Greece under the direction of California artist Linda Goodman. Other travels which inspired unique travel bodies of artwork include his journeys to Cape Town, South Africa, Tokyo, Japan, Buenos Aires, Argentina, Berlin, Germany, Dublin, Ireland, Jerusalem, Israel, São Paulo, Brazil, Nice, France, Port of Spain, Trinidad & Tobago, Havana, Cuba, Auckland, New Zealand, Bogota, Colombia and Hoi An, Vietnam. In January of 2020, Palmer announced to his First Class Club that he will travel to The Galapagos Islands to complete his annual international art series. Due to the global coronavirus pandemic, unfortunately, this trip was canceled. Nevertheless, in September of 2020 Palmer will be releasing an “international series” that remains a mystery to his First Class Club.

During the course of his twenty-two career as a professional artist, John has self-published seven art books: Deliverance and More than Words (2003), Escapism (2004), Seven (2005) and Jane & Co. (2010), Nave Museum (2010), Faces (2012), The 52 Project (2015), and Through the Lens (2018). The Art of Meaningful Living, a collaborative project with Houston psychotherapist Christopher Brown, debuted at the Book Expo America in May of 2009 and has since gained national, critical acclaim. The Art of Meaningful Living was available in bookstores nationwide and is now offered exclusively through Palmer’s gallery. In 2018, International Escapist Nabarupa Bhattacharjee of Mumbai, India released John Ross Palmer: Through the Lens of Nabarupa Bhattacharjee in lieu of a solo art exhibition. The hardcover book is a photobiography of Palmer featuring Bhattacharjee’s photography of Palmer and his artwork. In includes well-known Palmer quotes and the story behind ten of his most historic paintings. 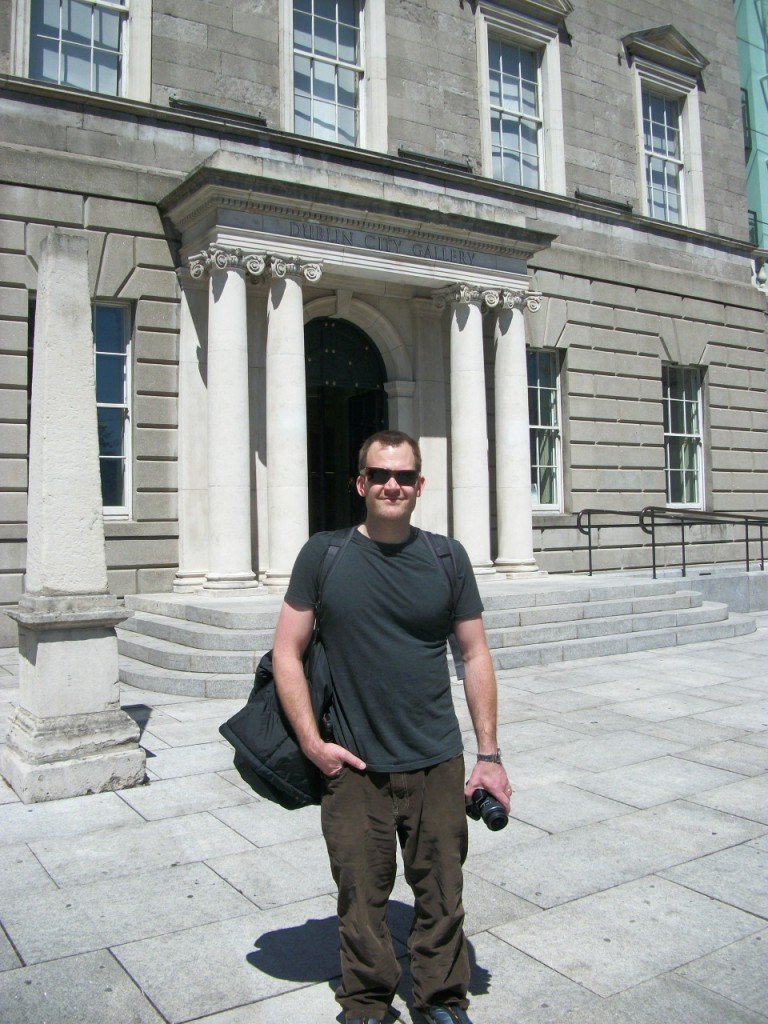 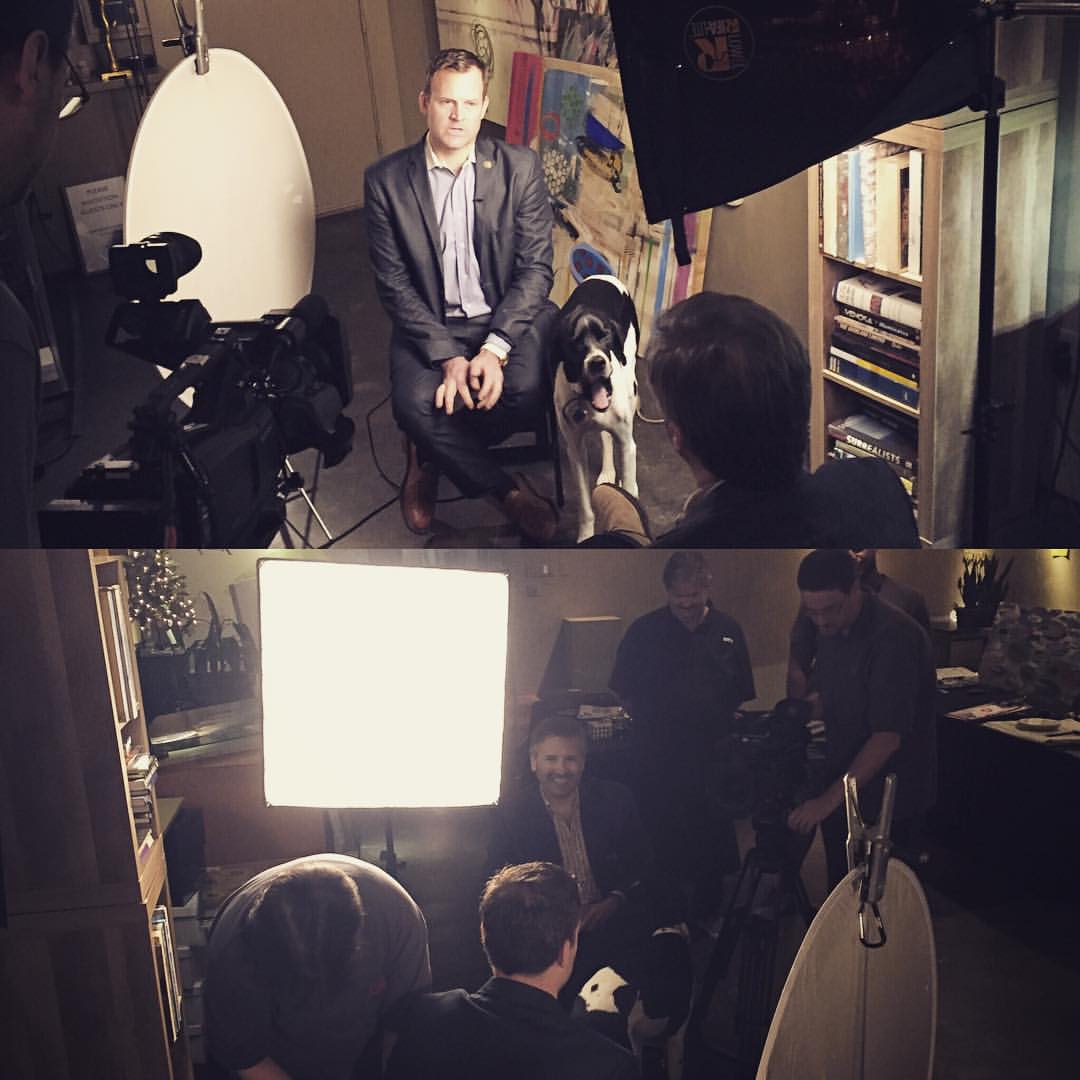 John’s work has been featured in many restaurants, publications, homes, and businesses around the globe. His art has appeared in the Houston Chronicle, Inside Houston, The Voice, Outsmart, Prime Living Magazine, CultureMap, Houston Modern Luxury, PaperCity Magazine, Fox News, the Irish Independent, Haaretz (Israel), Folha de S. Paulo (Brazil), and Houston Public Media’s Arts Insight with Ernie Manouse in 2016. John was selected as the Featured Artist of The Periwinkle Foundation’s “Making a Mark”, in partnership with Texas Children’s Hospital as well as the 2006 Via Colori Featured Artist, to benefit the Houston Center for Hearing and Speech. John has also worked closely and made generous contributions to some of his favorite Houston charities, including S.I.R.E., the Arthritis Foundation, the Montrose Clinic, and the Houston Heights Association. In August 2009, John Ross Palmer was the Featured Artist for ARTcetera, benefiting the Leukemia and Lymphoma Society. In 2010, John Ross Palmer served as Featured Artist at Art4Life benefiting AIDS Foundation Houston and the 2010 Hearts & Buckles Art Auction sponsored by Cowboys & Indians Magazine and benefitting Texas ranch families. In April 2010, he served as Featured Artist at Art with Heart benefitting the San Jose Clinic. Palmer was most honored to be named the Artist of the Year for 2010 by the Museum of Cultural Arts Houston. In 2010, Palmer was named as a Finalist for the highly-sought-after Hunting Art Prize, the amazing art competition that gives the winner the largest cash prize in the United States of America. In March of 2011, artist John Ross Palmer served as the sole juror for the highly prestigious Michigan Fine Arts Competition. Later in 2011, Palmer was named Outreach United’s Featured Artist and his artwork was the featured painting at the 5th Annual Houston Coming Out Day Party. In April 2012, Artist John Ross Palmer will serve as the Featured Artist for Goodwill Houston at a Fiesta-themed Gala to be held at the River Oaks Country Club on April 21, 2012. In December 2012, Palmer was honored to win abOut Magazine’s F.A.C.E. Award for the GLBT Community’s Most Influential Artist. Palmer won the F.A.C.E. honor for a second consecutive year in 2013 and he served as a Presenter at the chic ceremony in Montrose, Houston, Texas. In 2014, Palmer won the prestigious Volunteer Houston Service Award in the Arts Category. Later that same year, John Ross Palmer was awarded the President’s Medal by the Houston League of Women Voters. In 2015, Palmer was selected as a Presenter at the 25th Annual Points of Light Convention in Houston alongside other presenters House Leader Nancy Pelosi and faith leader Joel Osteen. In 2018, Palmer celebrated his twentieth anniversary of being a full-time artist with a five-day retrospective series of events that highlighted his mentoring, international art series,  and Satori collection. View the special anniversary documentary by clicking here. At the onset of 2019, Palmer joined the ranks of President Barack Obama, Queen Elizabeth II, and Vladimir Putin by laying a wreath at the Tomb of the Unknown Soldier at Arlington National Cemetery. Palmer was joined by more than twenty of his top collectors from around the United States and treated them to an exquisite luncheon in the private dining room of The Old Ebbitt Grill.

Even though Palmer is still considered to be a relatively young artist, he is already being featured at the museum level. From 2009 to 2010, Palmer was honored to have the longest-running display in the history of the art museum at the Children’s Museum of Acadiana in Lafayette, Louisiana. The exhibit, The Heads and Tales of Ten Presidents, not only featured Palmer’s fine artwork but also incorporated an educational experience for the young men and women of Louisiana. Palmer took the time to go and paint with the kids to inspire confidence in their artistic ability from a young age. In the summer of 2010, Palmer was honored along with Houston Artist Chris Silkwood with a solo and collaborative exhibit at the historic Nave Museum in Victoria, Texas. The Nave has exhibited talented artists from around the globe, and, based on the statistics, experienced the highest volume of attendance in the history of the museum during the Palmer & Silkwood exhibit. If you would like to see the artists speak at the Nave exhibit unveiling, please click here. The Museum of Coastal Carolina unveiled Palmer’s “Ocean Isle Memories” in April of 2016 followed by a run through Labor Day Weekend. The solo show highlighting the Texan artist garnered regional print and television media. 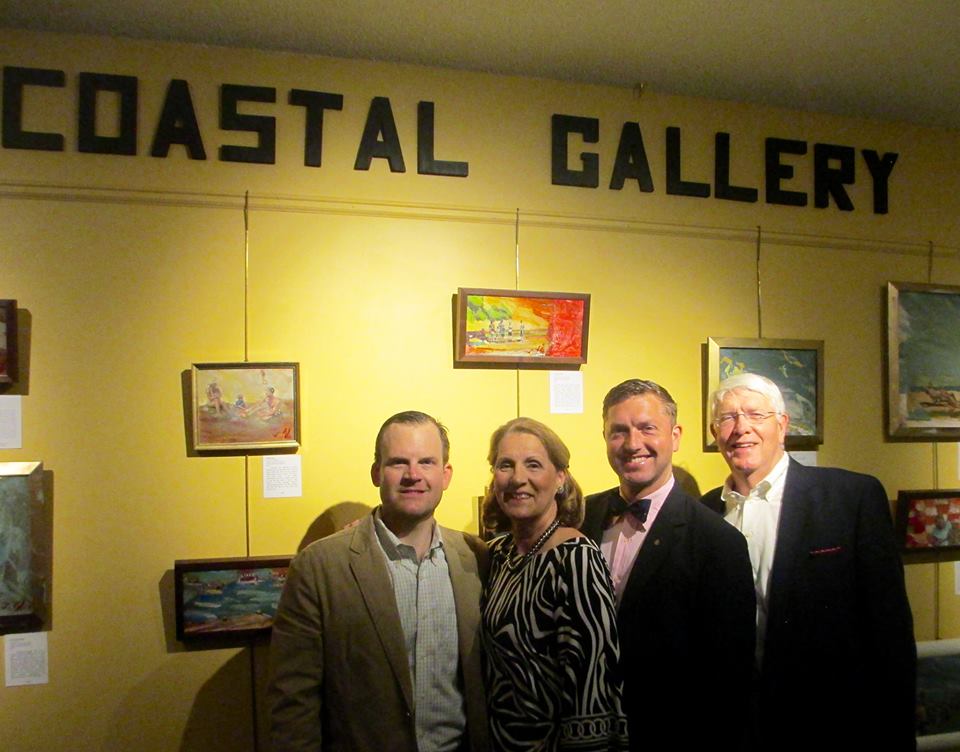 John Ross Palmer with Judy, Ryan and Bill Lindsay at the Museum of Coastal Carolina, April 2016. 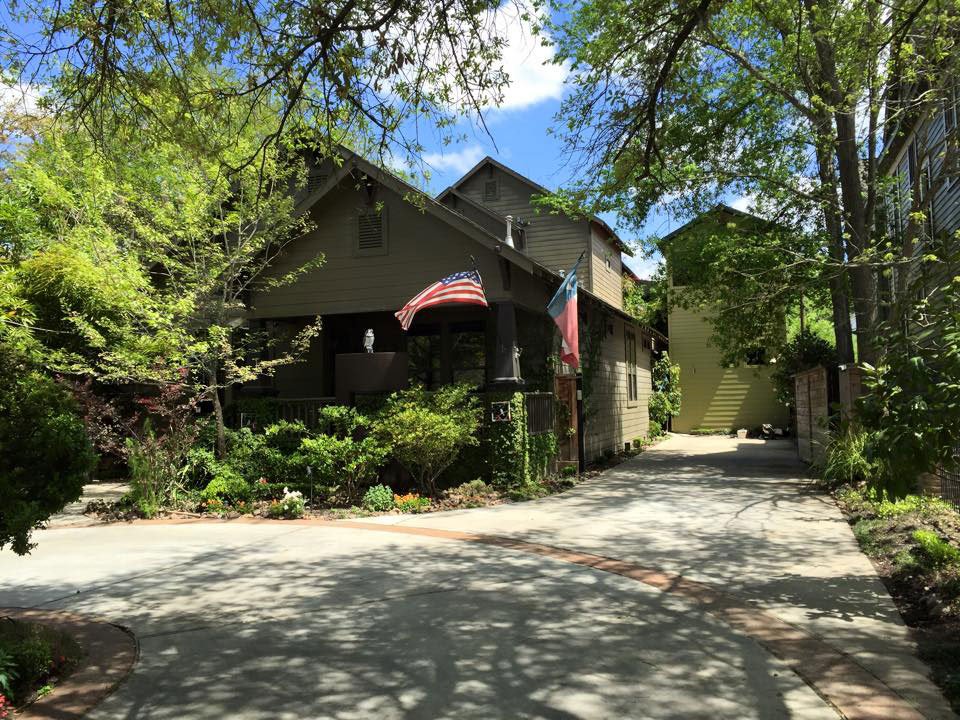 The John Palmer Art Gallery & Studio is located at 1218 Heights Boulevard in the heart of Houston’s Historic Heights.

As Johns’ art career has grown and expanded, so has his showplace. Initially in a 400 sq. ft. apartment, John was forced to paint on his driveway because he had no studio space. After many years of saving money from both bartending and selling art, John purchased a bungalow on West 17th Street in The Houston Heights in 2002. There, John showed his work in a small art studio, his original bungalow, and a second home that he acquired on the neighboring lot in 2005. After selling those two properties, John moved onto Winter Street Studios where he displayed his art from 2006 until 2008. In May of 2008, John finalized his 4,500 sq. ft. private residence, studio, and gallery on Heights Boulevard by not only preserving a historic bungalow but also adding on a chic, museum-quality showroom. In 2014, Palmer added the “Chrysalis” to his Historic Houston Heights art complex, a 1,600 sq. ft. ultimate-artist-training-ground for the artists accepted into this world-renown Escapist Mentorship Program. In 2020, Palmer connected his main gallery to the Chrysalis with a stunning glass Atrium. 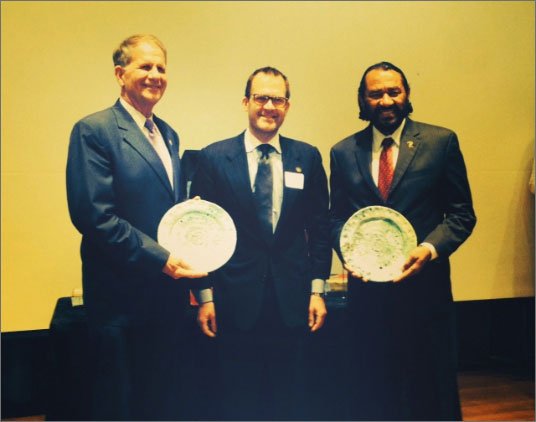 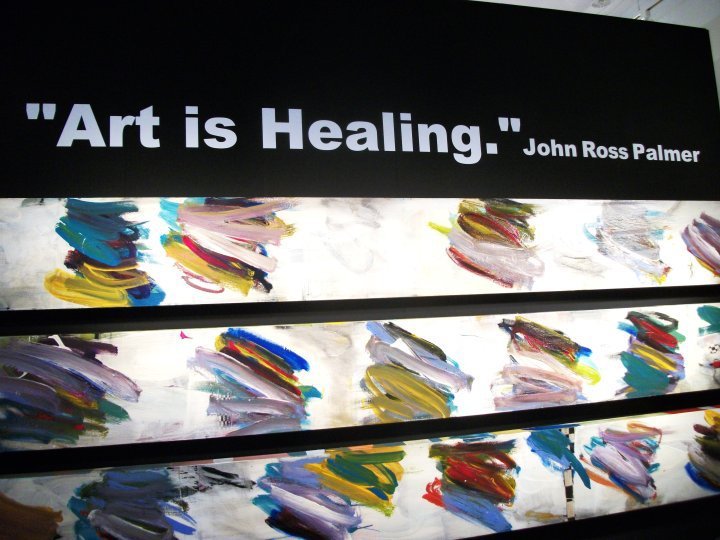 At the onset of 2020, Palmer traveled with a small group of twenty of his top collectors to New York City to celebrate his 46th birthday. Those in attendance all commission Palmer for an original painting that was inspired their favorite element(s) of The Big Apple. For their support of him, Palmer provided a beautifully curated weekend that included a Happy Hour at a luxury high-rise on the Upper East Side, a privately guided tour at the Whitney Museum, an intimate dinner on the patio of Joanne, a “backstage” tour of Broadway and the ultimate subway tour by the famed Gary Dennis. The experience was such a massive success that it will result in an annual tradition of traveling with Palmer during his January birthday. The “Birthday Club” will join Palmer in New Orleans, Louisiana in January of 2021. 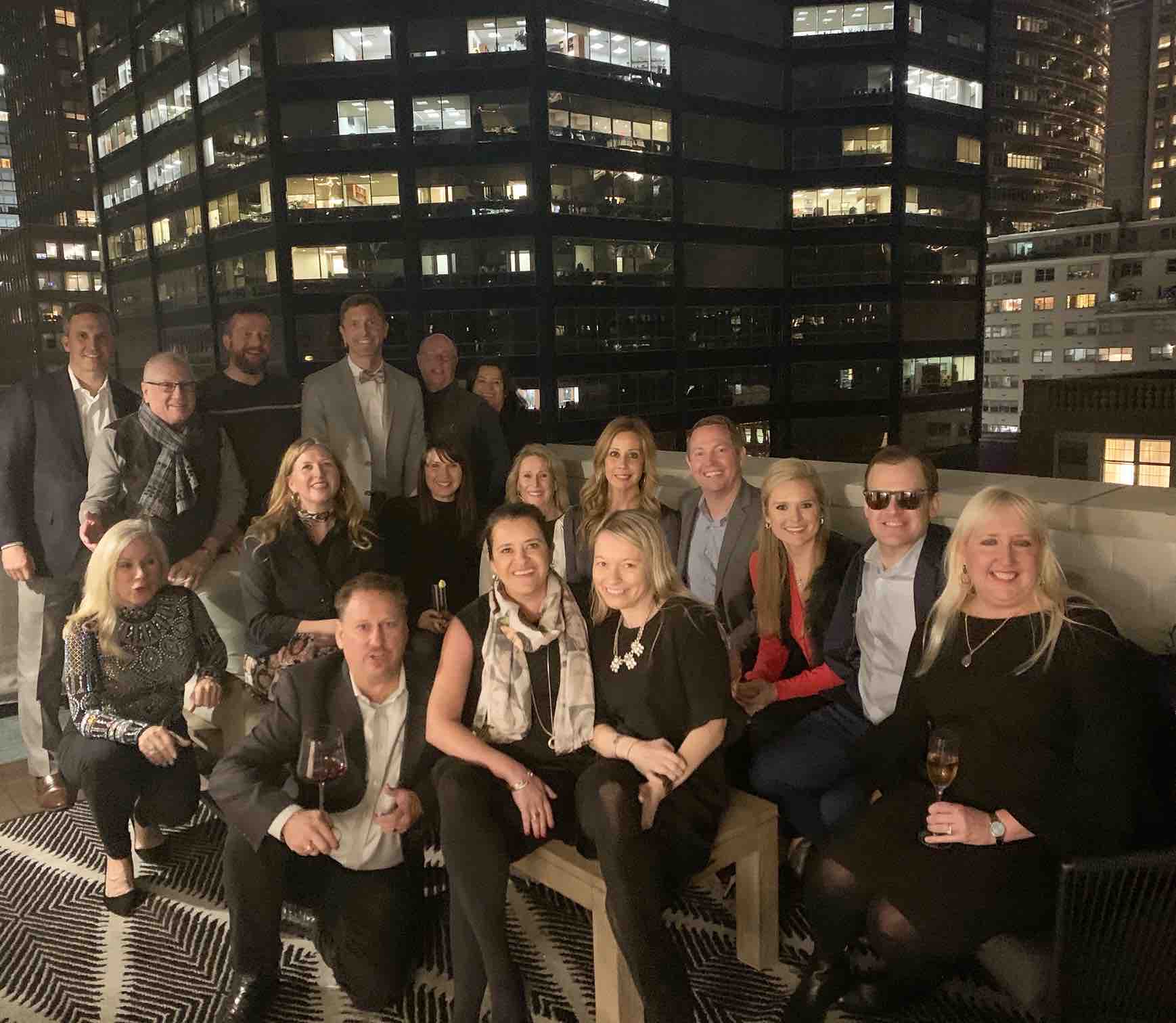 The “Birthday Club” with John Ross Palmer in New York City in January of 2020.

For his many years of service to the Space City, in 2009 John Ross Palmer was selected as a member of the My Houston Campaign by the Greater Houston Convention and Visitors Bureau along with a small number of other notable Houstonians including Beyonce Knowles, George Foreman, Hilary Duff, Clay Walker, ZZ Top, A.J. Foyt, and George & Barbara Bush. Palmer is also one of the notable Houstonians that is featured in the My Gay Houston Campaign–a program that highlights prominent members of the Houston LGBTQ+ Community.

2009 ushered in the rise of John Ross Palmer’s colossal online following. With hundreds of thousands of fans and followers on Facebook, Twitter, and Instagram, many people around the globe are following the whirlwind life and career of this larger-than-life artist, mentor, author, and celebrated founder of Escapism. In 2013, Houston Artist John Ross Palmer was recognized as one of only a select few living visual artists with a personal page on Wikipedia. In 2014, his presence on Wikipedia was magnified as he was highlighted on the List of American Artists (1900 and after). At this time, with Palmer’s birth year of 1974, only 17 artists were recognized from that year to the present. The list includes American Artist icons Warhol, Basquiat, and Rauschenberg. During the global Coronavirus pandemic, John and Ryan launched a Talk Show "Exploring Escapism". On Monday, August 24, 2020, they filmed their 100th Episode. 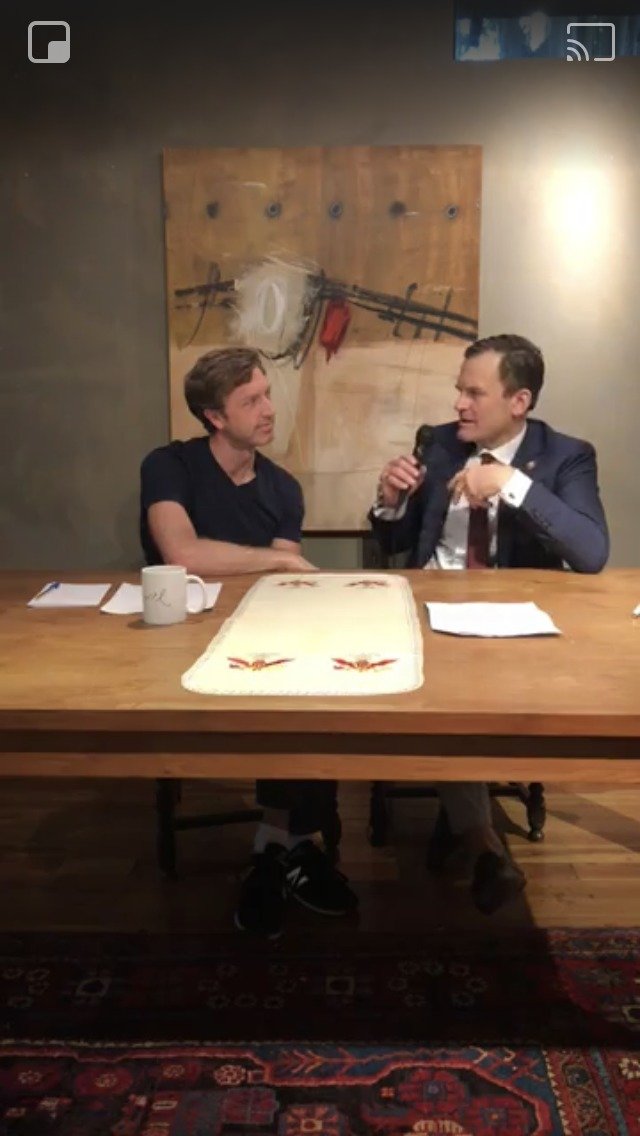